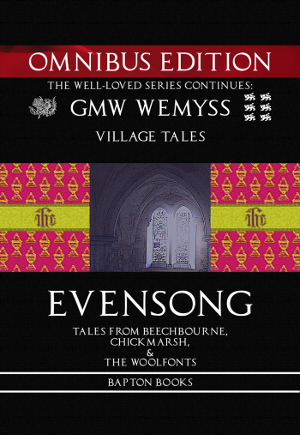 Sprawling, Trollopean, quintessentially British novel published in 2015 by GMW Wemyss: the second in the Village Tales series, following on from 2013's Cross And Poppy and followed by 2016's The Day Thou Gavest.

Not to be confused with Evensong of the Meratis Trilogy

. Nor with Gail Godwin's Evensong

It was published in two volumes, Evensong: Nunc Dimittis and Evensong: Te Lucis Ante Terminum, and one Doorstopper omnibus volume. "Omnibus" here meaning "the size of a London bus." For the better amusement of all concerned, the full title of the work is, in a 17th – 18th Century In Which a Trope Is Described pastiche, Evensong: Tales from Beechbourne, Chickmarsh, & the Woolfonts; the same being Village Tales recording the events of some few months in the District, to which are appended a series of recollections of interesting events having to do with the villages and district, their landmarks, and the persons of principal consequence therein, both present and historical. As you might guess, most chapters are succeeded by a chapter of historical (fictional) events in the villages, or short stories of local archaeological digs and the like.

The Rector, Noel Paddick SSC, and Sher Mirza are an established, handshakes-at-best but every meal together everyday (with a chaperone) Chastity Couple. The weather is appalling: the setting is the period of the 2015 UK floods, after all. Teddy Gates, "the Hipster Chef" and owner of The Woolford House Hotel, is now a newish and naive County Councillor (Lib Dem, of course). Three other councillors – one from each party – have conned him into agreeing a Community-Threatening Construction scheme to run up social housing in his ward: the chocolate-box Woolfonts (Woolfont Magna, Woolfont Parva, Woolfont Crucis, and Woolfont Abbas). That way, the other councillors get credit for their good works … and credit in their own wards for not putting up the social housing in their own backyards.

The crafty Duke of Taunton, the local landed proprietor, a peppery little man descended of a Stuart bastardy, points out that there is no land in the Woolfonts not already scheduled, protected, designated, or otherwise off-limits. But he determines to get Teddy out of his jam all the same. His Saving the Orphanage solution: get back some old Ministry of Defence land and build new, retro-Georgian houses.

All comes right in the end, but much is changed forever, and not without pain.

As a Doorstopper, is simply bursting with tropes.