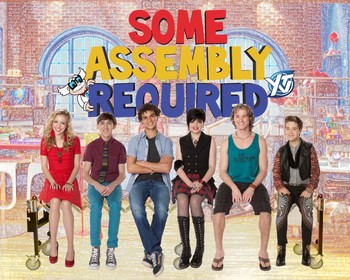 Some Assembly Required is a Canadian sitcom that was created by Dan Signer, the same person who created A.N.T. Farm, The Suite Life on Deck, and Mr. Young, and aired on YTV for three seasons from 2014 to 2016. The show was made available on Netflix in 2015.

Everyday 14-year-old Jarvis Raines becomes the CEO of a toy company called Knickknack Toys when he sues a toy company over a defective chemistry set that explodes and destroys his house. To help him run the company, Jarvis hires some kids from his high school: Piper Gray, a "hacker chick"; Bowie Sherman, the smart guy of the group; Geneva Hayes, the pretty but ditzy receptionist; Malcom "Knox" Knoxford III, the company's product safety tester; and Aster Vanderberg, the self-proclaimed "King of Swag" that serves as the company's chief design officer.