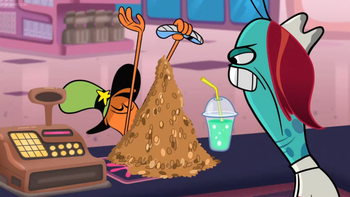 Good luck asking him for a tip.

You go to a store, and buy your things. You check out, and you don't have more than the total. No credit cards either. Instead, you must pay in exact change, but all you got is a really huge number of coins. This is either used as a last resort without going in debt, Just for Fun, protesting the recipient, or as a metaphor of something. The clerk can either try to count all of it, or trusts the customer and accepts the coins.

In reality, we've found methods of exchanging large sums of money without actually presenting large sums of money. For instance, you get a mortgage to buy a house. You get a paycheck every week, not $300 in cash per week. You have cashier's cheques to move large sums of money from one bank account to another. And in the United States and Canada, debit cards and prepaid cards are so common for use by people who don't have credit cards that almost nobody buys travelers checks anymore.

However, if you walk into a car dealership and offer to buy a car on the spot without financing, holding fists full of $100 bills, then this trope comes into effect.

On more expensive things, such as a luxury yacht, a Briefcase Full of Money can be used instead if a Zillion-Dollar Bill isn't available. May be the result of Ridiculous Future Inflation and Ridiculous Exchange Rates. Cheap Gold Coins is a related trope. Truth in Television.