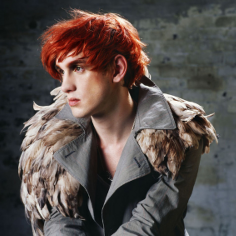 Patrick Wolf (born Patrick Denis Apps, 30 June 1983) is an alternative musician from London, England. He's been playing for years and released his first album in 2003. The genre of his songs swings wildly around from alternative to electronic to pop.

His discography is as follows:

Patrick Wolf and his music contain examples of the following tropes: