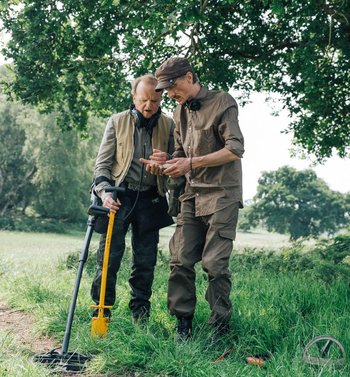 Lance and Andy discover a Roman spearhead
Lance: Metal detecting is the closest you'll get to time travel. See, archaeologists, they gather up the facts, piece the jigsaw together, work out how we lived and find the buildings we lived in, but what we do is... that's different. We unearth the scattered memories, mine for stories, fill in the personality. Detectorists. We're time travellers.
Andy: Yeah, all right. I'll give you that one.
Advertisement:

Mackenzie Crook and Toby Jones play Andy and Lance, two normal blokes who are amateur metal detectorists from the quaint English town of Danebury. They enjoy nothing more than wandering around the fields together looking for ancient artefacts with their metal detectors, talking about their lives and local history. Both they and the other members of the Danebury Metal Detecting Club dream of unearthing some Roman or Saxon gold one day.