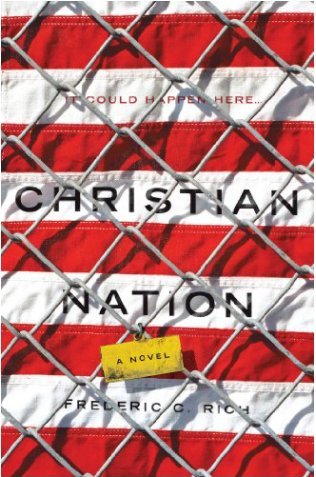 It could happen here.
Christian Nation: A Novel by Frederic C. Rich is a 2013 Alternate History Dystopia set in a theocratic United States. In this world, Sarah Palin and John McCain won the 2008 election, with Palin becoming President shortly after McCain dies. The novel itself takes place in 2029. An Audience Surrogate, a former lawyer named Greg, relates these events after being released from a POW camp for his part in the attempted secession of New York and subsequently obtaining a job at the New York Library where his job is destroying books. Homosexuality is outlawed, a Purity Web has replaced the Internet, Jews are given five years to convert to Christianity or be deported to Israel, and so on.
Advertisement:

Compare Victoria, a similar speculative political novel featuring an oppressive, near-future American government with its own La Résistance valiantly fighting back ... but from a politically opposite standpoint; and The Handmaid's Tale. where the USA also becomes a dystopian theocracy for different reasons.