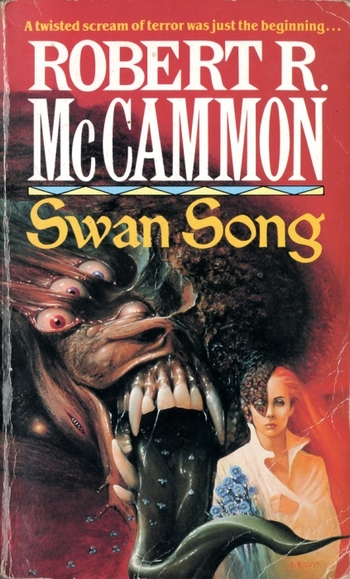 Swan Song is a post-apocalyptic novel by Robert R. McCammon, starting just prior to World War III and following a large group of people through the following seven years. There are elements of fantasy woven throughout it, with certain bits of magic proven to be real.

It opens with several of the characters just before the bombs go off—Sister Creep, later to be known as just "Sister", a quasi-crazy bag lady in New York City; Swan, a little girl who can make plants grow; Josh Hutchins, a retired wrestler; Roland Croninger, a boy whose parents have gone to hide out in what they believe to be a safe fortress, and Colonel Macklin, one of the people in charge of that fortress. Russia and America annihilate one another with nuclear weapons, leaving the country in ruins and many of those who survived wounded or disfigured.

Sister finds a ring of glass, like a crown in the ruins of Tiffany's, that proves to have strange powers and which the Big Bad, a demonic figure known as the Man with the Scarlet Eye, is willing to hunt down and kill everyone for. Via Dreaming of Things to Come she knows she has to get it to Swan, who can use it to bring life back to the destroyed land or humanity may never recover. It's a long, exceptionally detailed book, beautiful in places and really squicky in others, and not for the weak of stomach. Often compared to Stephen King's The Stand, and vice versa.

Not to be confused with Edmund Crispin's detective novel of the same title.