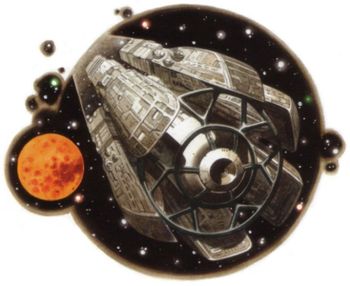 Six Dreadnaughts around a central core; a Jedi-led mission to explore the unknown regions of this galaxy, then strike out for the next one. What Could Possibly Go Wrong?
Advertisement:

is a Star Wars Legends novel by Timothy Zahn. Survivor's Quest is also included on this page.

Somewhere between The Phantom Menace and Attack of the Clones, a ship carrying three Corellian traders has a hyperdrive malfunction and ends up far outside of Republic space. They are taken into the custody of Commander Mitth'raw'nuruodo

of the Chiss Expansionary Defense Fleet, and from them he learns how to speak Basic and about the Republic, potentially a threat to his people. Thrawn is currently testing/fighting an entirely different set of aliens, the Vagaari.

At the same time, the domineering Jedi Master Jorus C'baoth seeks to approve Outbound Flight, an ambitious expeditionary project that sent a mission of six Jedi Masters, twelve Jedi Knights and 50,000 men, women and children beyond the borders of the Galactic Republic into the Unknown Regions where they hoped to pierce the edge of the galaxy and seek out extragalactic life. Unwittingly with a little help from Darth Sidious, who is all too happy to get as many Jedi out of the way as possible, he succeeds and they launch.

Sidious's agent, Kinman Doriana, is sent with a Trade Federation battle fleet to intercept and destroy Outbound Flight some time after they leave Republic space. They encounter Commander Thrawn, who curbstomps them despite having a much smaller force, and captures the survivors, including droids. Doriana gets Thrawn in contact with Darth Sidious, who tries to convince him that Outbound Flight is a threat to the Chiss. Thrawn is cautious, but when Outbound Flight shows up and Thrawn uses it to destroy the Vagaari forces, C'baoth screws up everything and Outbound Flight is destroyed. Fifty-seven people and one Jedi survive, and Thrawn's brother aids this Jedi in a Heroic Sacrifice, causing Outbound Flight to crash in such a way that the survivors keep surviving, to no one's knowledge.

, set between the Hand of Thrawn duology and the New Jedi Order. Newlyweds Luke Skywalker and Mara Jade are contacted by the Empire of the Hand with a message from the Chiss, who invite them as New Republic representatives to come visit the wreckage of Outbound Flight, and reclaim the remains. They feel responsible for that rogue Commander's actions. Things are complicated when they are accompanied by a faux New Republic ambassador with his own agenda, and when the pair find that representatives from the Empire of the Hand, Commander Chak Fel and four stormtroopers of the Five-Oh-First, were sent along as their escort. Things are complicated more when some aliens show up claiming that the Jedi of Outbound Flight saved them from the Vagaari, and they want to pay their respects.

Things are complicated the most when everyone arrives to discover that there were survivors, who left descendants. They don't like Jedi at all. And the Vagaari are back.

The novels were published in Anachronic Order; readers who picked up on the clues left in the wreckage and hints in the dialogue in Survivor's Quest in 2004 had to wait until 2006 for Outbound Flight to connect the dots.

Both novels have a Zahn short story included in the paperback edition. Outbound Flight has "Mist Encounter

", about how the exiled Thrawn came into Imperial service; it was originally published in the Star Wars Adventure Journal. Survivor's Quest has "Fool's Bargain

", about the Empire of the Hand's 501st before the events of the novel.