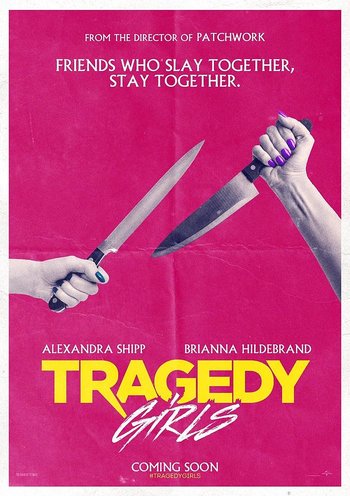 McKayla Hooper: Look, we're about to graduate and go to college, and we haven't even started our first killing spree. Is that what you want?
Sadie Cunningham: Of course not.
Advertisement:

Best friends Sadie (Hildebrand) and McKayla (Shipp) do everything together, including running their true crime website, "Tragedy Girls." In order to gain the recognition they so desperately crave, they decide to do what anyone would do: murder people themselves, and then report on it. Meanwhile, they've managed to capture a local Serial Killer, Lowell Orson Lehmann, and are currently keeping him locked up in a warehouse, in the hopes of using him as a scapegoat. As the Tragedy Girls become an overnight sensation, Sadie and McKayla fight to keep one step ahead of the local law enforcement, and keep their friendship intact.

The film was given a limited release in October 2017, before becoming available for streaming in February 2018. Blending elements of the classic slasher genre and social satire, it's been compared to both Scream and Heathers for its dark comedic elements. Jack Quaid stars as the girls' classmate, Jordan, and Kevin Durand stars as Lowell. Josh Hutcherson and Craig Robinson also appear in minor roles, with Robinson also working as a producer.

This film contains the following tropes...