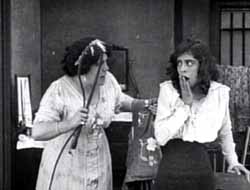 Put the damn kimono on!
Traffic in Souls is a 1913 film made by Universal, directed by George Loan Tucker.
Advertisement:

Mary Barton is a sensible young woman with a job in a New York City candy shop and a policeman boyfriend. But Mary's sister Lorna is less sensible, constantly late for work at the candy shop and the kind of girl who will leave work to go to lunch with a handsome stranger—who drugs her and takes her to a brothel. Lorna is kidnapped and forced into prostitution. Other victims who are being held prisoner at the brothel include a woman who is lured there immediately after getting off the train and two Swedish sisters fresh off the boat at Ellis Island. Will Mary save her sister from defilement? Will the traffic in souls be stopped?

Traffic in Souls was one of the first, and maybe the first, feature film produced in the United States. It was a huge hit and a milestone in the early history of Universal. It was inducted into the National Film Registry in 2006.