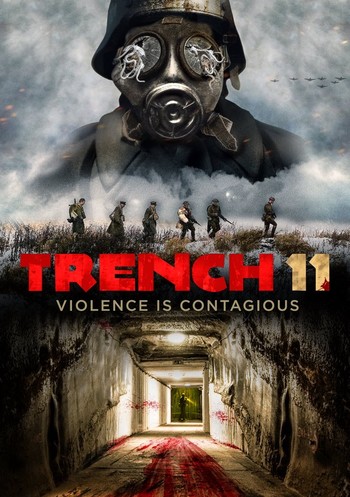 Trench 11 is a 2017 Direct-to-DVD Canadian-produced horror film set in the final days of World War I. British Intelligence has discovered a massive underground complex built behind the German lines in the Argonne Forest. When the American offensive cleared the forest, German troops abandoned and sealed the facility, but failed to destroy it. It is believed this may be the base of operations of Reiner, an infamous weapons scientist responsible for weaponizing chlorine and phosgene. A detachment of American soldiers led by British intelligence officers Major Jennings and Doctor Priest, accompanied by Canadian tunneling expert, Lieutenant Abraham Berton are sent in to secure the facility. Meanwhile, across No Man's Land, the German Army is not comfortable with letting the secrets within fall into Allied hands.