Film / The Town That Dreaded Sundown 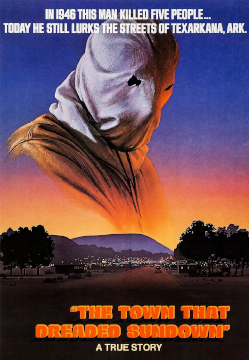 In 1946, the town of Texarkana, Arkansas is plagued by assaults and slayings committed by "the Phantom Killer". Investigating deputy Norman Ramsey (Andrew Prine) is baffled by the first attack on a couple, and when the assailant kills his next two victims, Texas Ranger J.D. Morales (Ben Johnson) is brought in to investigate the crimes. Unfortunately, finding the killer proves difficult...

In 2014 a meta-sequel was released by MGM. Produced by Ryan Murphy (of American Horror Story and Glee fame) and Jason Blum and directed by Alfonso Gomez-Rejon, the film follows a fictional copycat of the original murders. The original film is also featured in-universe as part of the town's Halloween celebrations.

This 1976 film provides examples of the following tropes: 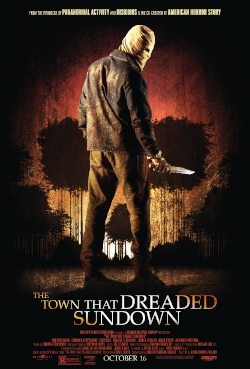