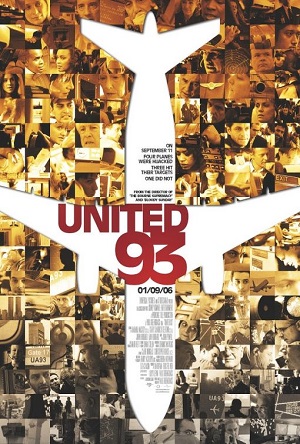 Written and directed by Paul Greengrass, United 93 was released into theaters five years after the September 11 attacks on the World Trade Center towers and the Pentagon. As You Know (we assume), the film is Based on a True Story — in this case, on the story of United Airlines Flight 93, one of the four planes hijacked on the morning of September 11, 2001. After the hijackers had taken over the plane and word had reached the plane that the other hijacked planes have crashed into the Twin Towers, the passengers rose up and took out the terrorists, which resulted in a Heroic Sacrifice when the plane crashed in a field in Pennsylvania instead of its intended target (probably the Capitol or The White House). The crash killed everyone aboard, but doubtlessly saved numerous more lives in the process.

Greengrass approached the daunting challenge of retelling the events of the titular flight with the same cautious, apolitical tone with which he guided Bloody Sunday. He casted a number of largely unknown actors and real professionals, then filmed the movie in a Faux Documentary style using separate isolated stages. The final product plays out in Real Time across its nearly two-hour running time.