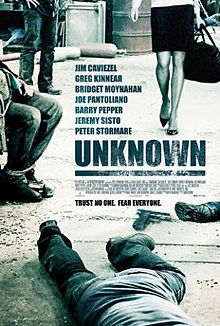 Trust no one. Fear everything.
Advertisement:

Unknown is a 2006 American crime-thriller film directed by Colombian filmmaker Simon Brand, starring Jim Caviezel, Greg Kinnear, Bridget Moynahan, Joe Pantoliano, Peter Stormare, and Barry Pepper. It's about a group of men apparently kidnapped and locked in a factory, with no memory of how they arrived there. Piecing together information around them, they realize that some were kidnapped and some were the kidnappers. They decide they must work together to figure out how to get away before the gang that captured them returns.

Not to be confused with the 2011 Liam Neeson thriller of the same name.