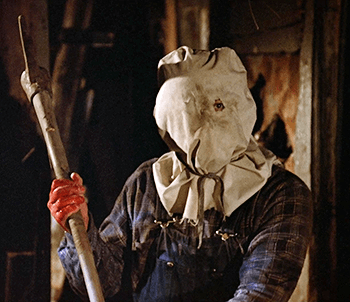 Jason Voorhees before he got his famous goaltender mask.
Advertisement:

Malevolent Masked Men meets Overalls and Gingham. You're all set for Hillbilly Horrors, the Cannibal Larder is stocked and the Creepy Gas Station Attendant gave those kids some great directions. But how is your bad guy dressed? Put a sack on his head. Not a wimpy paper bag, but a rugged, intimidating burlap bundle that happened to be lying around the barnyard. Like other masks, it dehumanizes the wearer,f often reducing them to an imposing silhouette with only eyeholes for expression. It also invokes the same eerie Uncanny Valley effect of the Scary Scarecrow, who are often constructed with a burlap head covered in Scary Stitches. Expect a Nightmare Face to lurk beneath, if the mask comes off at all. A Stock Costume.

Compare Hockey Mask and Chainsaw. May overlap with Stock Slasher.