Film / To Wong Foo, Thanks for Everything, Julie Newmar 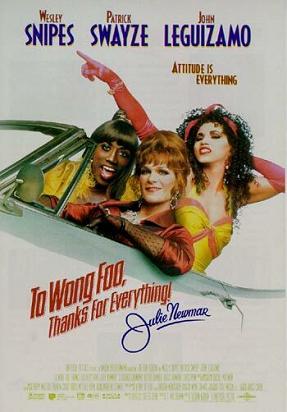 To Wong Foo, Thanks for Everything! Julie Newmar (or To Wong Foo for short) is a 1995 comedy about a trio of drag queens on a road trip to compete in a national pageant. Close friends Vida Boheme (Patrick Swayze) and Noxeema Jackson (Wesley Snipes) tie for a state-level Beauty Pageant in New York City, winning a trip to Los Angeles to compete for Drag Queen of America. On their way backstage, they run into competitor Chi-Chi Rodriguez (John Leguizamo), distraught that she lost. Seeing a diamond in the rough, charitable Vida convinces Noxie to take Chi-Chi with them to Hollywood while teaching her the ways of drag. To pay Chi-Chi's way, the queens sell their plane tickets (something else that doesn't thrill Noxie) for an old but stylish convertible and embark on their 2,000-mile journey across the US, making new friends and a few enemies along the way.

The movie essentially served as a comedic, American answer to The Adventures of Priscilla, Queen of the Desert, which was released in the previous year with a similar premise and equally-unwieldy name. However, while Priscilla was more of a Dramedy steeped in realism, To Wong Foo runs on Rule of Funny. We never see the queens out of drag, and the movie is vague on whether or not they're transgender (all three of them use female pronouns, which is common with drag queens in character regardless of their gender), though Vida and Chi-Chi are heavily implied to be.

Swayze and Leguizamo were nominated for Golden Globes, and the film has become a cult classic in the LGBT community. A decade before RuPaul's Drag Race, To Wong Foo spawned an entire generation of drag queens.