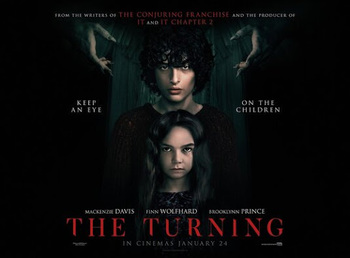 The Turning is a 2020 American supernatural horror film and a modern adaptation of the 1898 novella The Turn of the Screw. Steven Spielberg serves as an executive producer, and it stars Mackenzie Davis, Finn Wolfhard, and Brooklynn Prince.

As in the original novel, the plot focuses on a nanny (Davis) charged with taking care of two disturbed orphans, Miles and Flora (Wolfhard and Prince). Soon, however, she finds that not everything is as it appears to be and that there may be dark forces at work within the mansion they live in...