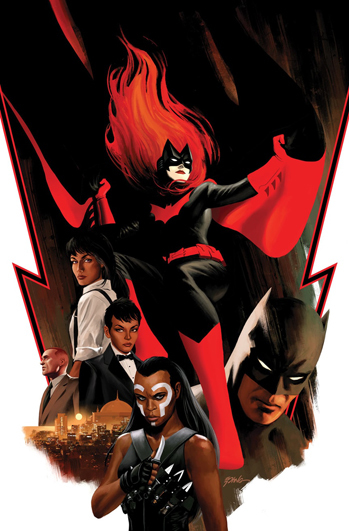 Batwoman (also known unofficially as Batwoman Rebirth) is a 2017 monthly comic book series published by DC Comics as a part of the Rebirth rebranding initiative. The series is written by Marguerite Bennett (along with Detective Comics writer James Tynion IV co-writing the Rebirth one-shot issue and first six issues) with Steve Epting on art duty for the first arc. Fernando Blanco takes over on art for the second arc.

Spinning out of a two-part story arc in Detective Comics (Rebirth), called "Batwoman Begins", the series follows Kate Kane as she goes on global black-ops missions in pursuit of supervillains who have escaped the jurisdiction of Gotham, and thus Batman. More of Kate's past will also be explored, in particular the time just after she left West Point and her training to become Batwoman.

The first arc, titled "The Many Arms of Death", follows Batwoman to the island nation of Coryana as she tracks down and attempts to dismantle a worldwide weapons smuggling ring trafficking a new bioweapon called Monster Venom, derived from the mutated creatures that attacked Gotham in Night of the Monster Men. While there, she also confronts her dark connection to the island, where she lived for a year during her period of self-destruction after leaving West Point.

The series began on March 15, 2017, after the "Batwoman Begins" storyline in January and the Rebirth one-shot in February, and ran until August 15, 2018.

For tropes related to the first Batwoman solo series (as well as for tropes pertaining to both the Kate Kane and Kathy Kane versions of Batwoman), see here.