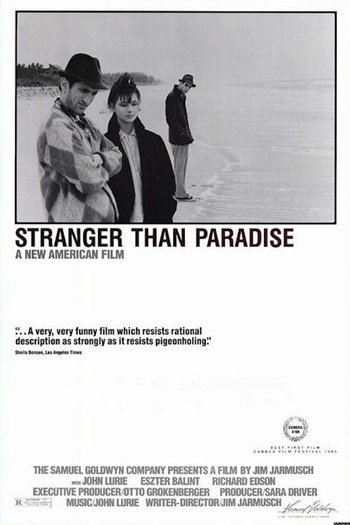 "You know, it's funny. You come to someplace new, and everything looks just the same."
Advertisement:

Stranger Than Paradise is a 1984 film directed by Jim Jarmusch.

Willie (John Lurie) is an aimless young man living in a dingy New York apartment. He also happens to be an immigrant from Hungary whose real first name is "Bela". The now fully Americanized Willie is unpleasantly surprised to learn that his teenaged cousin Eva, arriving from Hungary, will be staying with him for ten days before going on to Cleveland. He accepts her with ill grace, not taking her anywhere or showing her anything, not even bringing her along when he and his similarly aimless loser buddy Eddie (Richard Edson) go to the race track.

Eva leaves for Cleveland and gets a dead-end job at a hot dog stand. After getting caught cheating at poker, Willie and Eddie hurriedly exit New York and go to see Eva in Cleveland. On a whim the three of them go to Florida—but nothing ever changes.

Not to be confused with either the Comic Book series Strangers in Paradise or the Video Game Stranger of Paradise: Final Fantasy Origin.