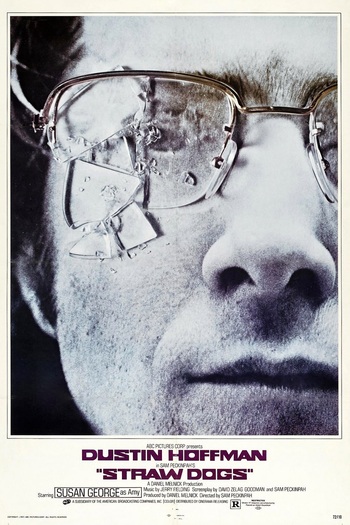 "All right. You've had your fun. And if you don't clear out now... there'll be real trouble. I mean it."
— David Sumner
Advertisement:

The film centers around American math professor David Sumner (Hoffman), who moves to the small English village where his wife Amy (Susan George) grew up. Working on a book, David withdraws into his study for hours at a time while his bored and idle wife begs for his attention. Meanwhile, a group of blue-collar locals, one of them his wife's old flame, provide a constant threat to his manliness as they leer at his wife and mock him behind his back. As the workers become more invasive and threatening, Amy criticizes David for not confronting them and flaunts herself hoping to provoke her husband to action. When he is finally pushed too far, David stands up for himself in a shockingly violent finale.

In 2011, a remake starring James Marsden and Kate Bosworth was released. Please put tropes regarding that film here.