Film / The Strangers: Prey at Night 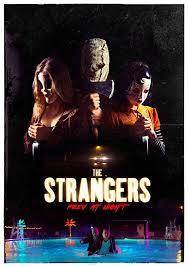 The Strangers: Prey at Night is a 2018 horror film. It is the sequel to The Strangers, with Johannes Roberts taking over as director, though the previous film’s director, Bryan Bertino, co-wrote the script.

A family of four—parents Mike (Martin Henderson) and Cindy (Christina Hendricks) and kids Luke (Lewis Pullman) and Kinsey (Bailee Madison)—take a trip to a secluded trailer park, unaware of the three masked killers waiting for them to arrive.