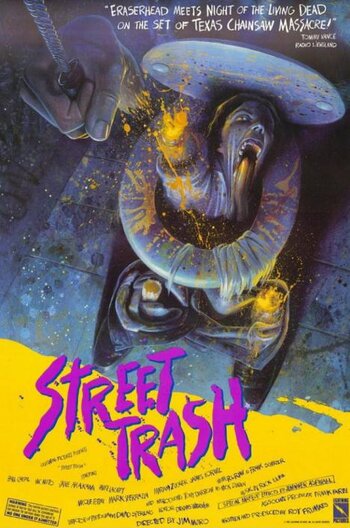 Why thank you, I am a bit parched...
Things in New York are about to go down the toilet.
Advertisement:

Street Trash is a 1987 horror/splatter movie written by Roy Frumkes and directed by James Muro. Neither are well known for anything else, although Muro's steadicam work in this movie was so impressive that he later found regular work as a Hollywood camera operator. You may have heard of one of the films Muro worked on - Titanic (1997).

The plot, loosely defined in this context, follows two young homeless brothers, Fred and Kevin, who live in a junkyard ruled by Bronson, a psychotic and traumatized Vietnam veteran. One day, the owner of a nearby liquor store discovers a crate full of Tenafly Viper: bottles of booze from the 1920's that had been stashed away behind a grate in the basement. Seeing an easy way to make some money, he decides to sell the Viper for a dollar a bottle. The local homeless population, needing to spend their money frugally, take advantage of this offer. There's only one catch: anyone who drinks the Viper melts into a streaming, day-glo ooze while screaming in horror.