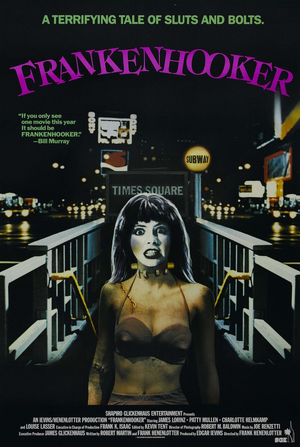 Wanna date?
My heart is packed so full of love for you,
That I dreamed I exploded—like aerosol cans sometimes do.
I blew with such force that my bones became shrapnel,
And leveled the town, except a small chapel.
My teeth flew like bullets!
(I didn't know what was happening)
They killed everyone in sight;
Except for the chaplin.
And then, thanks to him, we were happily wed;
Even though at the time, I think we were both dead.
Advertisement:
The end.
— "Warning: Contents Under Pressure" by Jeffrey Franken

Frankenhooker is a low-budget horror-comedy written and directed by Frank Henenlotter and released in 1990.

It begins with a happy young couple, Jeffrey Franken and Elizabeth Shelley, madly in love and soon to wed. The whole family has gathered for the father of the bride's birthday, and young Jeffrey is spending his time obsessively working on some kind of weird eye-in-a-brain-hooked-to-a-television-screen thing. When Elizabeth finally pulls him away from his project—allowing room for her mother to make her coleslaw—she takes him outside to the party. Her gift for her father is a brand new lawnmower, which her brilliant husband-to-be has rigged with a remote control. She's so excited by this, she can't help but demonstrate how it works... while standing in front of it. Liquification Ensues.

Jeffrey is distraught by the death of his beloved, but there is hope. Somehow, he manages to grab and run off with Elizabeth's severed head, which he stashes away in a meat freezer full of a strange, bubbling, purple liquid. All he needs is some body parts. After contemplating the moral issues involved in acquiring these parts, he finally decides his best course of action is to find and kill some hookers and reconstruct Elizabeth from the best pieces.

The results are nothing short of pure insanity.