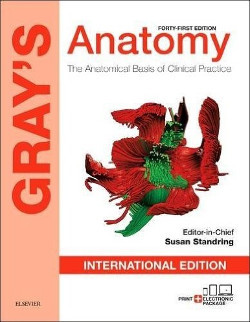 The 41st edition from 2015 (international edition; the U.S. edition is the same but with black background).

Gray's Anatomy was first published in 1858 (then named Anatomy of the Human Body) by Henry Gray. It is an "atlas" of the human body, consisting of detailed images and description of human anatomy and its function. It has been continually published for over 150 years; as of the late 2010s it has reached its 41st edition. It is considered the authoritative source book for anything concerning anatomy.

Not to be confused with TV series Grey's Anatomy, though that show's name obviously is a pun on and reference to this book.