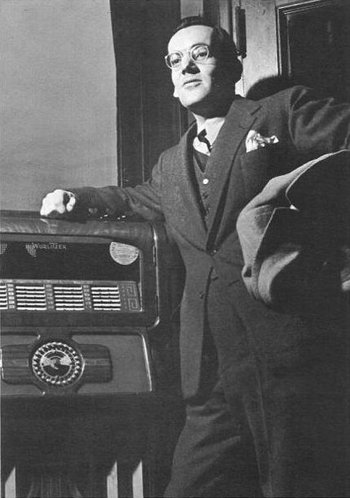 That jukebox is probably playing one of his records.
Advertisement:

The Glenn Miller Orchestra's recording of "Chattanooga Choo-Choo", which they introduced to the world in the film Sun Valley Serenade, was the first ever record to be awarded a gold record. Said gold record, awarded in February 1942 to celebrate 1.2 million copies sold, actually predates the RIAA certification, which wasn't established until 1958.note The gold record was presented to him by his record label, RCA Victor — the pre-RIAA gold records were distributed by record companies to their own artists.

Also notable for being a Real Life example of Never Found the Body. When World War II broke out, he volunteered for service, but was considered too old (and, perhaps, too famous) for active duty, and was instead commissioned a Captain in the Army Air Force, assigned to entertain the troops. Officially declared missing in action when his plane disappeared around the English Channel in bad weather, he was eventually declared dead in absentia. Historians ascribes the event to the type of plane he was traveling in being infamous faulty in cold conditions, meaning that Miller most likely met his end in the Channel after his plane shorted out, and the fact that his disappearance went unnoticed for 72 hours, due to the Germans launching a counter-offensive, meant that any recovery effort would have been downright impossible. But as any situations where a body is not recovered is wont to do, Miller's disappearance would spawn several Urban Legends about the true cause of his death being covered up the US Military, for reasons that ranges from the RAF had accidentally shot down his plane, over him being assassinated after going on a top-secret mission for Dwight D. Eisenhower to negotiate a German surrender, to him dying of a heart attack while in bed with a French prostitute.

These days he's mostly remembered for being mentioned in the All in the Family theme song (or, if you're British, a joke in Red Dwarf about aliens returning planes that disappeared during the War).