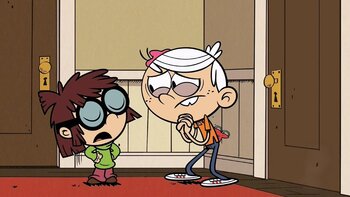 You've got gum in your hair, Lincoln.
Advertisement:

A character through some sort of circumstance gets a piece of chewed gum in their hair, making it impossible to get the sticky substance out. They might try home remedies such as peanut butter or oil. In some drastic cases, cut it out, which may result in a Gag Haircut or Traumatic Haircut.