"An ice cream for the young lady!" 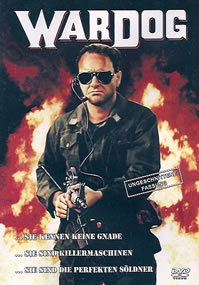 Charles Stewart is a Vietnam vet who just got back from the wake for his brother, Ricky. The Army claims that Ricky was KIA, even though nobody found his body. Charles enlists the help of his computer-savvy friend Frank, and informant Dean Daniels to learn the truth.

Turns out Ricky was conscripted by Charles old commanding officer, Col.Spacek, for the "War Dog" program. An attempt to create an army of chemically enhanced super soldiers. With matching shades.

When it first came out, it was obviously inspired by The Terminator. Nowadays it's interesting to note that the plot resembles that of Universal Soldier to a T. And that movie would be released 5 years later.

It's also infamous for a scene where the War Dogs assault a gas station and absolutely annihilate everyone there, including the children. They die graphically with bloody squib effects.