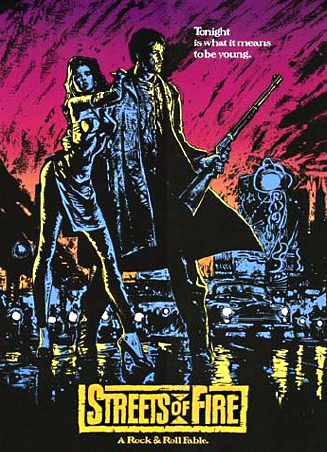 Another time, another place.
Everybody's going nowhere slowly
They're only fighting for the chance to be last
There's nothing wrong with going nowhere baby
But we should be going Nowhere Fast
Advertisement:

From Walter Hill, the director of The Warriors and 48 Hrs., Streets of Fire is a 1984 film, described as a "Rock & Roll Fable." Its setting is a kind of Alternate Universe, a mix of an over-the-top 50s and a dystopian near-future as seen from the 80s; a card in the opening title sequence tells us it's set in "another time, another place." The charm of this film lies in its darkly beautiful shots with lots of shadow and smoke and piercing colors, the comic-book style storytelling, and fantastic music. It is especially popular in Japan, despite having no initial success, commercially or critically. Notably, Bubblegum Crisis was influenced by this film — not to mention the Streets of Rage series.

The plot of the film involves Ellen Aim (Diane Lane), lead singer of the Attackers, who is kidnapped by a gang of bikers known as The Bombers at her most recent concert. One of the people in the audience, Reva Cody (Deborah Van Valkenburgh), sends a telegram to her brother Tom (Michael Pare), a war veteran - and Ellen's ex-boyfriend - asking him to return to "the Richmond", a district in the city. Tom Cody and the ex-soldier McCoy (Amy Madigan) are hired by Ellen's surly manager and boyfriend, Billy Fish (Rick Moranis) to rescue Ellen. The three of them search for Ellen to rescue her from the Bombers, only for Tom to find that he has feelings for Ellen that need to be reconciled.

Streets of Fire was intended to be the first in a projected trilogy of action films called "The Adventures of Tom Cody" with Hill tentatively titling the two sequels The Far City and Cody's Return. However, the film's eventual failure at the box office put an end to the project.

The song "Tonight Is What It Means To Be Young," which plays in the ending scene and over the credits (and whose title also appeared as the tagline for the film) was later adapted into "Der Tanz der Vampire" ("The Dance of the Vampires") in the German-language stage musical Tanz Der Vampire. Another song, "I Can Dream About You," became the biggest hit of singer Dan Hartman's career.

An unofficial Fan Sequel was released in 2013 in film festivals and in 2019 on home release, produced by Albert Pyun. Entitled Road To Hell, it has Michael Pare and Deborah Van Valkenburgh reprising their roles from the original film, and is significantly Darker and Edgier.

No relation to the song from the Initial D soundtrack. Or Bruce Springsteen's one, part of Darkness on the Edge of Town - though it was intended as part of the film before the studio admitted they wouldn't get the rights before opening day.