Film / Strangers on a Train 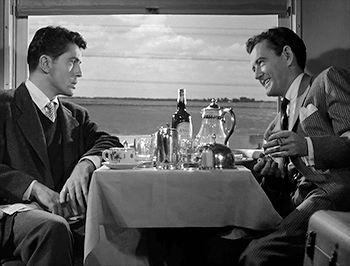 Bruno Anthony: It's so simple, too. Two fellows meet accidentally, like you and me. No connection between them at all. Never saw each other before. Each one has somebody that he'd like to get rid of. So... they swap murders.
Guy Haines: Swap murders?
Bruno Anthony: Each fellow does the other fellow's murder. Then there's nothing to connect them. Each one has murdered a total stranger. Like, you do my murder; I do yours.
Guy Haines: We're coming into my station.
Bruno Anthony: For example: your wife, my father. Criss-cross.
Advertisement:

Guy Haines (Granger), an amateur tennis star, chances to meet the eccentric Bruno Anthony (Walker) on a train. Bruno has read about Guy's romantic troubles in the paper, and suggests that he might want to... dispose of his wife, the unfaithful Mrs. Miriam Joyce Haines (Kasey Rogers under the alias "Laura Elliot"), so he can marry Anne Morton (Ruth Roman), the daughter of a U.S. Senator (Leo G. Carroll). Bruno tells Guy of his own unhappiness with his father, and outlines his plot for the perfect murder: two strangers who each have someone they want dead "exchange murders" so that neither's motive can be uncovered. Guy laughs the whole thing off and gets off the train but, as he learns a few days later, Bruno wasn't joking.

The film, based on a novel of the same name by Patricia Highsmith (of Ripliad fame), had a screenplay originally written by Raymond Chandler (before he was fired and replaced). The book and film together are the Trope Namer, Trope Maker, and Trope Codifier for "Strangers on a Train"-Plot Murder, although there's a lot more to the plot than just that one trope.

This was the final completed film for Robert Walker, who died suddenly of drug and alcohol abuse less than two months after release.note He did appear in one more film (My Son John), but his death occurred before he finished filming his scenes.

The story was loosely remade in 1969 as the film Once You Kiss a Stranger, with the Bruno character Gender Flipped into a woman, who wants the protagonist (now a golf pro) to murder her psychiatrist in exchange for her killing a rival player for him. The 1987 comedy Throw Momma from the Train is part remake, part Homage, and part Affectionate Parody of this film. In 2015, yet another prospective remake was announced, to be directed by David Fincher, written by Gillian Flynn, and starring Ben Affleck. However, this film — simply titled Strangers — has gotten stuck in Development Hell due to the schedules of those three people.