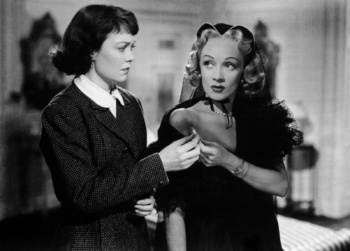 Pictured - the laziest girl in town on the right.
Advertisement:

The events of the film take place in London and involve students of the Royal Academy of Dramatic Art (RADA). Eve Gill (Wyman) is one such student. She has long had an unrequited crush on fellow student Jonathan Cooper (Todd). One day, Jonathan interrupts her rehearsal. He is frantic and seeking her help. He explains that he got himself in a mess. He is the secret lover of Charlotte Inwood (Dietrich), a well-known singer and actress. Who happens to be married. Or rather WAS married. He claims that Charlotte killed her husband in an argument and then left her house in a bloodstained dress. She visited him in his apartment and got him to go back to her house. He was only supposed to get her a clean dress. He decided instead to re-arrange the crime scene and make it look as if the death was the result of a burglary gone wrong. He got caught in the act and is now on the run. He is a wanted man and needs a place to hide.

Eve convinces her father, Commodore Gill (Alastair Sim), to help Jonathan stay out of sight for a while. The Commodore notices something peculiar in the bloodstained dress Jonathan carries with him. The blood spatter is not random enough to be accidental. It looks as if someone deliberately smeared the cloth in blood. Eve concludes that Charlotte has framed poor Jonathan for the murder. She decides to investigate Charlotte and her activities first hand. She bribes Charlotte's maid to play sick for a while and poses as temporary replacement "Doris Tinsdale".

Both as Eve and Doris, our amateur sleuth meets Detective Inspector Wilfred Smith (Wilding) and starts falling for him. But all is not as it seems. Charlotte may have benefited from the murder but there are clues that she is not the actual killer. Jonathan may not be as innocent as he acts, and Smith knows more than he is willing to share with Eve.

Noted for how its plot twist broke a long-established cinematic convention, something that Hitchcock later regretted.