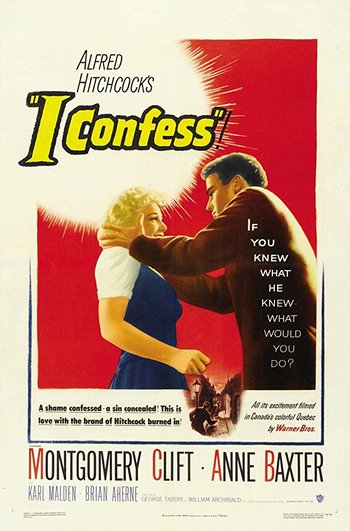 The main events of the film take place in Quebec City. Father Michael William Logan (Clift) is a local Roman Catholic priest. He employs Otto Keller (Hasse) as a caretaker for his church. Keller is a German immigrant, a formerly affluent fellow who now sustains himself as a part-time gardener. One evening, Keller asks Logan to hear his confession. Keller's sin is actually murder. He had attempted to steal money from Mr. Villette (Ovila Légaré), a wealthy lawyer, and ended up killing the guy. Because of the binding nature of the secrecy of the confessional, Father Logan cannot tell the police anything he now knows about this crime.

But Keller neglected to mention a significant detail. He had disguised himself with a cassock during the murder. There were witnesses when he exited the victim's house. Logan himself soon comes under suspicion for the murder. Not only does Logan fail to finger the real killer, but he refuses to explain to the police his own whereabouts at the time of the murder. He has his reasons.

Flashbacks explain that Logan was not always a priest. He had once been a regular Canadian boy, involved with a regular Canadian girl. He left to fight in World War II and lost contact with his girlfriend. He returned to find her married to someone else. The woman is Ruth Grandfort (Baxter), wife of a prominent politician, and the two still share a platonic love, taking time to secretly meet each other. He was with her at the time of the murder but cannot risk exposing her.

On the other hand, Ruth tells the truth to the police. But she talks a bit too much. Villette reportedly knew of her relationship with Father Logan, blackmailing her for quite a while. For the police, this means that Logan had a clear motive for the murder: the protection of his "lover". Logan is put on trial and is already found guilty by the public at large. Only Inspector Larrue (Malden) maintains doubts concerning the priest's guilt. The troubles of the cast are only beginning.

The film became subject of controversy over depicting a Roman Catholic priest being romantically involved with a woman, platonic or otherwise. Ireland banned it entirely.