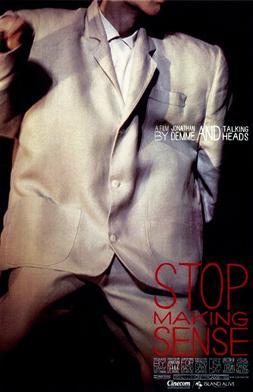 "Music is very physical, and often the body understands it before the head."
"Hi. I've got a tape I want to play."
—David Byrne, frontman of Talking Heads, opening the concert
Advertisement:

Stop Making Sense is a concert film featuring Talking Heads, and is often regarded by critics as the finest example of the genre. It was directed by Jonathan Demme and released in 1984, and documents three separate concerts filmed in Los Angeles in December 1983, with all the footage spliced together. These shows would be their last on U.S. soil until their 2002 Rock and Roll Hall of Fame induction performance. The film was notably the first to utilize digital audio techniques for the entirety of its runtime, making use of a 24-track digital recorder that allowed for much clearer sound than other films of the time.

Even though the film contains footage from all three concerts, it plays as a unified whole, and our attention is always on the performers onstage as they progress through their set. There are no cutaways to the audience until the very last number; there are no features on the band and their musical evolution; there are no interviews with the musicians backstage as they prepare for the concert. The camerawork is extremely understated and naturalistic, with very long takes and no quick cuts. All of these qualities are extremely rare among concert films, then and now, especially in contrast to the music videos that were changing the shape of the industry at the time.

The music itself is, broadly speaking, New Wave, but with a host of other influences, especially funk. Just under half of the songs are from the Speaking in Tongues album, which their tour was supporting; in fact, all but three songs from the album ("I Get Wild/Wild Gravity", "Moon Rocks", and "Pull Up the Roots") appear on the setlist. However, the band also plays a number of their older hits, as well as "What a Day That Was", a piece from David Byrne's soundtrack to Twyla Harp's 1981 dance performance The Catherine Wheel.note Another piece from the Catherine Wheel soundtrack, "Big Business", was performed and filmed, but was cut from the theatrical release alongside performances of "Cities" and "I Zimbra". Yet another song from the soundtrack, "Big Blue Plymouth (Eyes Wide Open)" was performed at the shows but apparently not filmed, or at least no official footage has surfaced. "Love → Building on Fire" and "The Book I Read" were also performed on the tour, but were dropped for these performances and from the handful of subsequent concerts early in 1984; incidentally, the live arrangements of these songs were much more faithful to the studio releases compared to the funk-oriented rearrangements of the rest of the setlist, which may at least partly explain why they were dropped.

The film would eventually receive a Spiritual Successor 36 years later with the Spike Lee-directed American Utopia, taken from Byrne's 2019 Broadway residency show in support of his 2018 album of the same name.

Setlist (also used for the 1999 live album; timestamps for the latter included here):

Hi. I've got some tropes I want to play:

Does anybody have any questions?