Film / Nobody Sleeps in the Woods Tonight 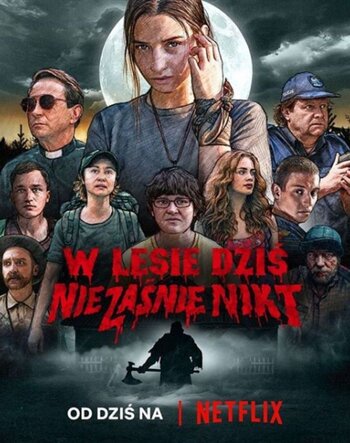 Julek: Fifteen thousand people disappear in Poland each year, a third of them in the woods.
Daniel: We'll beat the statistics.
Julek: That's not funny.

A whole bunch of teenagers have come to camp for some good old-fashioned (technology-free) camp fun. The kids are all split into groups and are each sent on a different activity. One such group is made up of Zosia Wolska (Julia Wieniawa-Narkiewicz), Julek Rosiejka (Michal Lupa), Aniela Turek (Wiktoria Gasiewska), Daniel Czajka (Sebastian Dela), and Bartek Sokolowski (Stanislaw Cywka) under Ms. Iza (Gabriela Muskala), and they're going to be taking a brisk three-day nature hike in the Polish woods.

What none of them realize, however, is that there are a couple of people in the woods. People who have a very selective diet. People that these campers would be very smart to stay away from.

Naturally, what started out as a simple hike in the woods becomes a nightmarish struggle for survival against people with murderous intent.

The film was released on Netflix on October 28th, 2020. The movie has a sequel, Nobody Sleeps in the Woods Tonight II.

Nobody Sleeps in the Woods Tonight contains examples of: