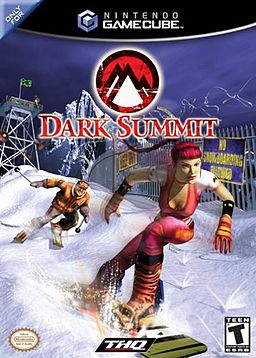 Mysterious military experiments are being performed on a ski resort. As an undercover snowboarder, your job is to expose and put an end to them. Fortunately, the military has a mole working on the inside to provide you with information on their shady doings, and give you objectives.

That's the plot of this rather obscure game by Radical Entertainment, released in 2001 for PS2/Xbox and 2002 for Nintendo Gamecube, and which combines snowboarding with adventure. You're not just snowboarding for the sake of it, you're trying to stop The Man!

The sports elements are all there - you can perform tricks, the courses are designed for you to try your hand at risky stunts, and you can string combos together. All these earn you experience points. The adventure elements come from the many mission objectives, the plot, the many secret areas and alternate routes on the mountain, and the "ski lift points" you collect by performing missions, which earn you higher positions on the mountain, as well as advance you farther in the game.

The game has a foreboding soundtrack to go along with the whole "mysterious conspiracy" theme, but it's played a bit tongue-in-cheek. Frequent loudspeaker announcements warn skiers not to go poking around where they don't belong, and there's a lot of animosity towards the game's rebellious snowboarder heroes.