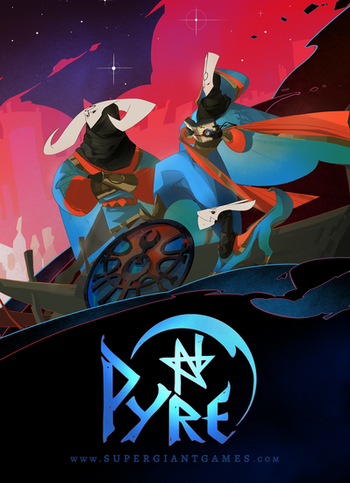 "READER, dare you tamper with the forbidden knowledge, so soon after your exile?"
When the stars align
The Rites shall come to bear
Illuminate the signs
The exiles shall be there.
— Darren Korb, "In the Flame", reveal trailer

Pyre is a role-playing game by Supergiant Games (well known for their award-sweeping and story-driven Bastion and Transistor).

You have been expelled by the Commonwealth into a harsh realm called the Downside, only rescued from certain death by the strangers Hedwyn, Jodariel and Rukey. Their only hope, and yours, of escaping the Downside lies within the mysterious Book of Rites, which only you can read. You are tasked with carrying out the Rites described inside, which involves co-ordinating your team as their Reader, following the stars to each Rite, and engaging in ritual fights against other travelling triumvirates, so that you might win back your freedom.

As you travel in the Downside, you will manage your resources, seek knowledge of your new surroundings, interact with fellow travelers and guide them towards enlightenment in the Rites.

Unlike previous entries from Supergiant Games, combat in Pyre plays more like a fantasy version of basketball game where you control a party of three to jump, pass, tackle, or fire their Auras to take out opponents with the aim of putting a Celestial Orb into the opposing party's Pyre until it is doused, and stopping your opponents from extinguishing your Pyre in turn. And more importantly, as the game's creative director Greg Kasavin encourages you to

, you can continue your story even after you lose a match.

It was released on PC (through Steam and itch.io

Strands may break alone
But twisted make a braid
Together on their own
The journey shall be made.