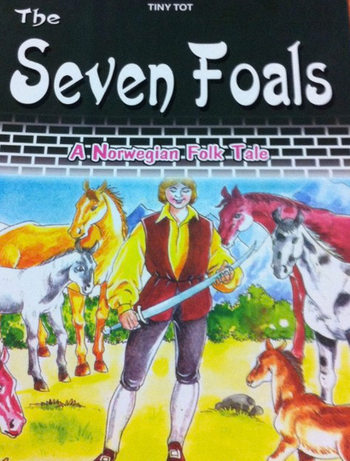 A poor couple had three sons, and the youngest just sat about and poked in the ashes. The oldest went to the king and asked for a job; the king set him to watch his seven foals all day and if he could tell where they went, he would have the princess and half the kingdom, but if he failed, the king would cut three red stripes out of his back. He agreed, but after chasing the foals through rugged lands, an old woman called him to stop with her, and he did. The old woman gave him some water and turf, and he claimed that was what they ate and drank. The king had the three strips taken out. The next brother tried as well and came to the same end.

Then the youngest went, and had a time to persuade the king since he was their brother, but succeeded, and when the old woman called to him, he ran on. One of the foals then told him to ride on his back. They rode on, and came to a tree that had a room inside, with a sword and a flask. The foals had him try the sword, and when he could not, drink from the flask until he could. The foals tell him to cut off their heads on his wedding day, which will turn them back into men, because they are the king's sons.

They then go on and cross a river and reach a chapel where they become men. There they receive wine and bread from the priest, and the youngest son took some to show the king. When he does, the king agrees he has succeeded, and they hold the wedding. The youngest son cut off the foals' head as he had agreed, and brings them in, and there is more rejoicing. The king says he shall be his heir, because now his sons can get lands of their own.