Literature / The Princess on the Glass Hill 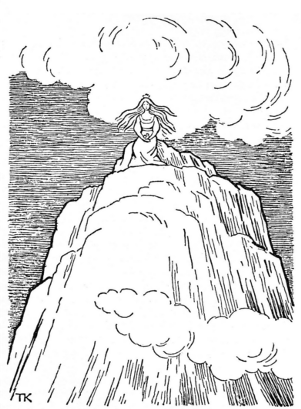 But how did she ever get up?
Advertisement:

The Princess On The Glass Hill is a Norwegian Fairy Tale collected by Peter Christen Asbjørnsen and Jorgen Moe. Andrew Lang included it in The Blue Fairy Book.

A farm had a field that would have been good for hay except that every St. John's night, all the grass was eaten. For two years, the farmer's oldest two sons stayed up on that night to guard the field, but they were frightened off by an earthquake. The youngest (Boots or Cinderlad, depending on the version), waited through three earthquakes, and found the grass was eaten by a splendid horse, and by it was a brass suit of shining armor. He threw steel over the horse, which gave him power over it, so he rode it away to somewhere secret and told his brothers that nothing had happened to him. The next year, he did it again, though the armor was silver, and the next, when the suit was gold.

The king had his daughter sit on a glass mountain, and whoever could climb it and get the golden apples out of her lap would marry her. All the men who came to try it slipped and slid about, but a knight in a suit of brass armor rode up a third of the way, and then rode back. The princess threw him one of the apples to encourage him, but he still rode off. The next day it happened again, except that a knight in silver armor rode two-thirds of the way up the hill, and the princess liked him better than the other. The third day, a knight in gold armor rode all the way up and took the apple, but rode off again immediately after.

When the king summoned all the nobles and knights, and none of them had the golden apples, he summoned everyone in the kingdom. No one had the apples, and the king demanded whether everyone had come. The older brothers admitted that their brother had not, and so he was fetched, produced the apples, and married the princess.