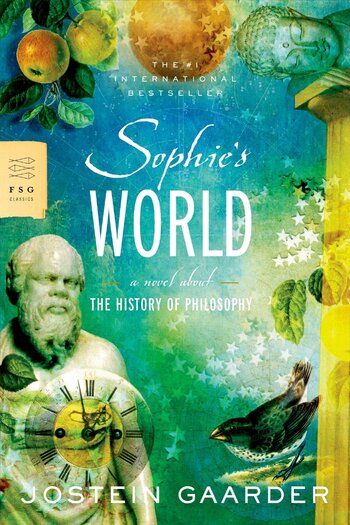 Sophie's World (Norwegian: 'Sofies verden') is a novel by Jostein Gaarder about a Norwegian girl, Sophie Amundsen, who one day starts receiving letters with philosophy lessons from a mysterious stranger. Together they explore the entire history of philosophy, and find out more about who they are themselves. It is a lot less dry than it sounds, thanks to the personality of Sophie and a big twist near the end.
Advertisement:

The story is full of mysteries. Who is Alberto Knox, the philosophy teacher? Why would a UN major send his daughter Hilde postcards by way of Sophie, who doesn't know either of them? How do Hilde's scarf and other objects find their way into Sophie's world?

Originally written in Norwegian, Sophie's World has been translated into 54 languages. There is a little known but surprisingly faithful and good movie adaptation made in the late 1990s. A computer game was also based on the novel.

The book is both a mystery novel and a fun philosophy course in itself, so it is heavily recommended as an introduction or refresher to philosophy, for both children (not too young, of course) and adults.

Spiritualized's Ladies and Gentlemen We Are Floating in Space is named after a line from it.