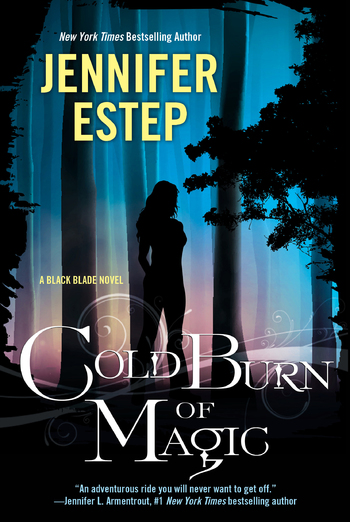 The Black Blade series is a fantasy series by Jennifer Estep, author of the Elemental Assassin, Bigtime and Mythos Academy series.

Lila Sterling was the daughter of a some time thief, some time bodyguard who was vacationing in the magical and mob-controlled city of Cloudburst Falls when they stumbled into a mob hit. Lila's mother intervened, saving the intended victims, but in return she ended up targeted and killed by the Family who ordered the attack. Orphaned and alone, Lila takes on her grandmother's maiden name of Merriweather and lives on the streets as a thief, picking the pockets of tourists to buy food and robbing homes in order to afford more expensive necessities.

Years after her mother's death, Lila visits her fence's pawnshop to deliver the take from her previous night's job when she gets caught up in another mob hit, which she ends up helping to fight off. A few days later, Lila is 'invited' to pay a call on the Family who she had intervened on behalf of at the pawnshop. Once there, Lila discovers a few unpleasant surprises.

The boy she had rescued in the pawnshop was Devon Sinclair, son and heir of Claudia Sinclair, head of the second most powerful Family in Cloudburst Falls - and the boy Lila's mother had been murdered for aiding. And his mother wanted to hire Lila to be his new bodyguard.