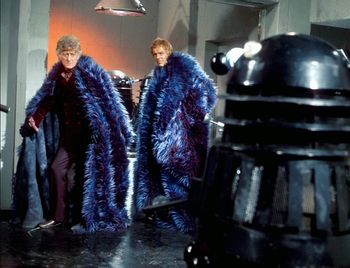 Using Cookie Monster pelts as camouflage wasn't the Doctor's smartest move...
You know, for a man who abhors violence, I took great satisfaction in doing that.
— The Doctor surveys the smoking remains of a Dalek
Advertisement:

The one with killer insulation foam and the invisible Cookie Monsters.

Written by Terry Nation. This six-episode serial first aired from April 7 to May 12, 1973.

The TARDIS lands in a forbidding jungle, but with the Doctor seriously injured and slipping into a coma (thanks to being shot by the Master in the fallout of the latter's terrorism plot with the Daleks), Jo sets out to see if she can find help. She comes across a party of Thals, and stays in hiding aboard their crashed spaceship while they go to help the Doctor. After they have treated him, they tell him that they have travelled to this planet, Spiridon, to destroy a group of Daleks who have come to try and uncover the secrets of invisibility discovered by the natives. Any relation to the aforementioned Dalek/Master conspiracy is nonexistent, other than the presence of Daleks doing Dalek things and the Doctor & Jo being caught in the mix.

Another Thal ship arrives and crashes (the Thals are evidently not great pilots) and the survivors tell of a force of ten thousand Daleks somewhere on Spiridon. The Doctor and the Thals find the Daleks in suspended animation in a cavern below the planet's surface. Using explosives, they blow up a rock wall separating the cavern from one of the planet's ice volcanoes, and the Daleks are destroyed.

The Supreme Dalek and his guards arrive on the planet, only to be stranded as the Thals steal their spaceship and the Doctor and Jo leave in the TARDIS.

The story got an effects beef-up in the 2019 Season 10 Blu-Ray box set.
Advertisement:

Daleks do not accept failure!

The Dalek Supreme exterminates a Dalek section leader for failure on Spirodon.

Daleks do not accept failure!

The Dalek Supreme exterminates a Dalek section leader for failure on Spirodon.