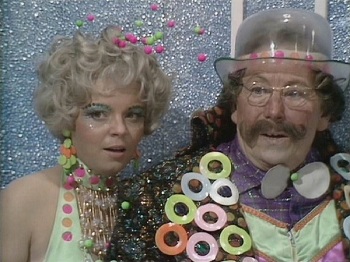 "Vorg, I think we're being watched..."
Pletrac: The function of this tribunal is to keep this planet clean. This Tellurian creature comes from outside our solar system and is a possible carrier of contagion. Furthermore the creature may be hostile.
The Doctor: Would you kindly stop referring to me as "the creature", sir. Or I may well become exceedingly hostile!
Advertisement:

The one with meta humour. And the one and only time you'll see a Cyberman in a Pertwee era serial outside of flashbacks or hallucinations, for all of five seconds. Also, the one where the theme tune sounded like twangy rubber bands.note The briefly used "Delaware" variant of the Doctor Who theme, named after the modified EMS Synthi 100— the very same one previously used to score "The Sea Devils"— that it was performed on. It was only used in the Australian airings of this serial (sources vary as to whether its inclusion in that specific region was intentional or not) and subsequently discontinued because it got poor reception from the series staff themselves.

Written by Robert Holmes. This four-episode serial first aired from January 27 to February 17, 1973.

With the TARDIS again apparently fixed, the Doctor takes Jo on a test flight and they land on the S.S. Bernice, a cargo ship with a small complement of passengers crossing the Indian Ocean in 1926.

... Except that they quickly realise that the ship is trapped in a time loop, and the Doctor discovers that they are in fact trapped in a miniaturised form inside a Miniscope: a banned device which miniaturises and traps life-forms to be used as a peep-show. A giant hand appears and removes the TARDIS from the machine.

The Doctor and Jo escape into a different part of the scope, to be menaced by fearsome Drashigs. Eventually, the Doctor manages to break out entirely, and is restored to full size, but Jo is still trapped inside.

The scope is being shown around by two entertainers, Vorg and Shirna, Lurmans visiting the reclusive planet of Inter Minor and hoping to make money from the curious natives. However, they have fallen afoul of the planet's bureaucracy as they do not have a permit for the Miniscope. To top it all, the scope is on the point of breaking down.

The Doctor attempts to rescue Jo, but his efforts are hampered by the internal politics of Inter Minor, where two locals plan to overthrow the government by allowing the Drashigs to escape. Vorg uses a disintegrator gun to destroy the Drashigs, and the Doctor links the Miniscope to the TARDIS to send all the captive creatures back where they came from and rescue Jo.

As the Doctor and Jo depart, Vorg and Shirna are busy setting up a variant of the old three-card trick to try and earn enough credit bars to leave Inter Minor...

His miniature zoo destroyed, Vorg comes up with a new way of making money off of Inter Minor's bureaucratic inhabitants.

His miniature zoo destroyed, Vorg comes up with a new way of making money off of Inter Minor's bureaucratic inhabitants.