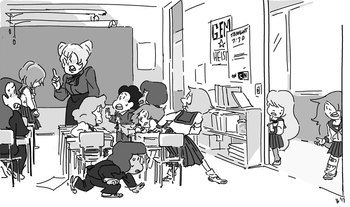 The Crystal Gems approach Pink Diamond's Zoo in the Roaming Eye, a Red Eye watching from the distance as a sentry. Entering the Zoo, the Crystal Gems witness two Amethyst guards next to the entryway. After unfusing from Garnet, Sapphire comes up with a plan to infiltrate the facility. The Crystal Gems will assume the roles they were originally made for: Sapphire is an aristocrat on a special assignment, accompanied by her Ruby guard and Pearl servant, with an Amethyst for additional muscle. They approach the Amethyst guards who ask the Crystal Gems to state their purpose, Sapphire answering, "I'm here to make a delivery to the Human Zoo." The Amethysts inform the group that the Zoo has shut down and Steven has to be thrown into space, only to reveal it was a cruel joke. Holly Blue Agate enters and scolds the guards for not informing her a Sapphire has arrived and orders them to apologize to Sapphire for their incompetence.Sapphire informs Holly Blue that she has a human for the Zoo. Holly Blue is surprised with the delivery of two humans after nothing for millennia and says Blue Diamond will be most pleased. She orders the guards to take Steven into the Zoo, but Sapphire requests a tour of the facility (enabling Steven to remain with them for the moment). Amethyst cannot join the group, for Holly Blue orders her to help the others guard the door. Holly Blue describes the history and areas of the facility. She emphasizes Blue Diamond's "merciful and giving nature", shown in her "selfless" act of preserving the facility in Pink Diamond's memory. Sapphire asks Holly Blue how to enter the Zoo, to which she answers via the service door, a one-way access point that ensures no escape or compromise. Steven whispers to Ruby and Pearl his idea to create a distraction so they can enter the containment area.Ruby quickly comes up with a plan and shouts "Explosion!" She explains to the group she "left the gravity engine idling." After Sapphire understands her plan, she clarifies to Holly Blue that the Roaming Eye's engine will overheat and explode. Sapphire and Holly Blue walk back to the ship to avert the impending crisis. When they leave, Ruby rants about Holly Blue's claims about Blue Diamond being merciful before being reminded by Steven to focus on the mission. Ruby tells Pearl to open the door, but the panel displays a different interface than last time, making Pearl confused and unable to open the door. As Pearl continues interacting with the panel, Steven and Ruby help out by bashing the door. They all stop when Sapphire is heard yelling to let the trio know she is returning. Holly Blue notices the marks on the door and asks Ruby and Pearl if they saw the Amethyst who did it, which relieves the Crystal Gems.Two Amethysts approach to inform Holly Blue of important news. They are at first scolded by Holly Blue but manage to eventually blurt out that Blue Diamond is on her way back to the Zoo. Holly Blue reminds the Amethysts to be on their best behavior and tells Sapphire that Blue Diamond will want to thank her personally for the delivery. Holly Blue tells the Amethysts to take Steven to the assimilation bay. Steven goes through the assimilation process on a conveyor belt. He gets his face photographed for identity, has his body examined for things like temperature and photon sensitivity in the pupils, and is stripped to his underwear. He is then dressed in an outfit with earrings and a loincloth. Afterward, he is taken up through a water chute into the containment area of the Zoo, where he sees Greg being groomed by two humans.