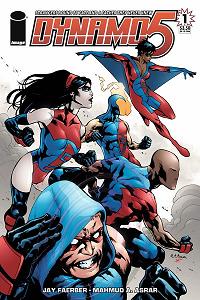 "A month ago, I didn't even know I had any brothers or sisters, much less super-powers. Now I'm fighting side-by-side with them to save the city from a bunch of sleazebags. Obviously, we're still getting the hang of it."
Advertisement:

Dynamo5 is a comic book created by writer Jay Faerber and artist Mahmud A. Asrar which focuses on the five illegitimate children of Captain Dynamo, "the greatest superhero in the world". After he is found dead in another woman's bed, his widow tracks down the confirmed offspring, hits them with the same Applied Phlebotinum that gave their father his Combo Platter Powers, and persuades them to follow in his footsteps as the protectors of Tower City.

Slingshot (Olivia "Livvie" Lewis): An earnest aspiring lawyer who manifested her father's ability to fly. As of issue 25 is now known as Menagerie ( shapeshifting- limited to animals )

Visionary (Hector Chang): A shy, nerdy high-school student who can now see through walls and fire lasers from his eyes. Now goes by Smasher (Super Strength and near invulnerability)