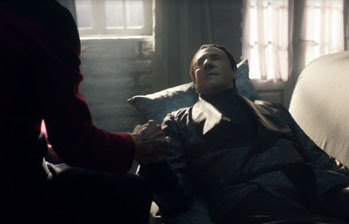 Blues skies smiling at me, nothing but blue skies do I see...
"Mortality gives meaning to human life, Captain. Peace, love, friendship... These are precious, because we know they cannot endure. A butterfly that lives forever is really not a butterfly at all."
—Data

Picard has to figure out a way to stop the Romulans from wiping out the synths while also trying to stop the synths from calling the higher synthetics to destroy all organic life.