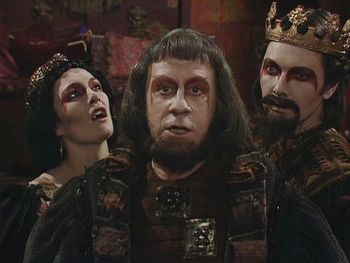 Vampire astronauts. No joke.
The Doctor: Do you know, it just occurs to me. There are vampire legends on almost every inhabited planet.
Romana: Really?
The Doctor: Yes. Creatures that stalk in the night and feast on the blood of the living. Creatures that fear sunlight and running water and certain herbs. Creatures that are so strong they can only be killed by beheading, or a stake through the heart.
Advertisement:

The one where the Doctor stabs someone with a rocket.

Written by Terrance Dicks. This four-episode serial first aired from November 22 to December 13, 1980.

The TARDIS (still in E-Space) lands on a planet that seems to be inhabited only by a single small village full of peasants and a castle occupied by three sinister rulers. This turns out to be because the planet's inhabitants come from a crashed spaceship from Earth; the castle is built from the remains of the spaceship. The captain and his executive officers became the rulers, and the peasants are descended from everybody else.

That's not the interesting bit, though: the interesting bit is that the Three Who Rule are vampires. And they're working to revive their master, a Giant Vampire who fought (and nearly defeated) the Time Lords themselves aeons ago.

The Doctor must answer the question: Just how do you deal with a Giant Vampire? A bit of wood with a point at one end really isn't going to do the job. A giant pointy castle tower, however, will.

Terrance Dicks had originally proposed this story several years earlier, for the slot that ended up going to "Horror of Fang Rock"; it was turned down at the time because the BBC was about to air Count Dracula (1977), and they didn't want anybody to think Doctor Who was taking the mickey; it was repurposed for this season due to a lack of other usable scripts.