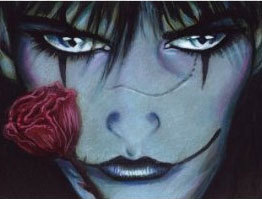 Love is forever.
"People once believed that when someone dies, a crow carries their soul to the land of the dead. But sometimes, something so bad happens that a terrible sadness is carried with it and the soul can't rest. Then sometimes, just sometimes, the crow can bring that soul back to put the wrong things right."
— Sarah, from the movie version
"It's not death if you refuse it... It is if you accept it."
— Eric, from the comic version
Advertisement:

The Crow is a franchise of comic books, films, novels and a television series based on a comic by James O'Barr that he wrote over several years but was first published in 1989. There is a basic formula - a protagonist who suffers wrongful death, usually along with one or more loved ones, comes back from the dead for a Roaring Rampage of Revenge and is guided by a spiritual entity in the form of a crow - but the finer details vary from text to text.

In 1978, a drunk driver killed James O'Barr's fiancée, Beverly. O'Barr later heard a story about a couple killed for the woman's twenty-dollar engagement ring. The two incidents became one in O'Barr's mind, leading him to write The Crow, in an attempt to work out his angst over the incidents.

The comic book was adapted into a film in 1994. The film is a cult classic, much of its fame unfortunately deriving from the accidental death of its lead actor, Brandon Lee.

The Crow, the comic, tells the story of two lovers, Eric and Shelly, who are brutally attacked by a street gang after their car breaks down on the wrong side of Detroit. Shelly dies at the scene, and Eric manages to hang on until he gets to the hospital but expires on the operating table. A year later, Eric reappears. Guided by a sardonic talking crow that perhaps only he can see, Eric tracks down the gang members one by one and kills them in increasingly creative and brutal ways, never stopping until they are all dead and he can go to his eternal rest.

The Crow, the film, tells the story of two lovers, Eric and Shelly, who are brutally attacked by a street gang as punishment when Shelly protests against tenant eviction in an area of Detroit run by a crime lord. Eric dies at the scene, and Shelly manages to hang on until help arrives, but dies after several agonising hours at the hospital. A year later, a spirit guide in the form of a crow - as in an actual real bird, and although it shares a psychic connection with Eric it does not talk - summons Eric from his grave. Guided by the crow, Eric tracks down the gang members one by one and kills them in increasingly creative and brutal ways, never stopping until they are all dead and he can go to his eternal rest.

In short: in the comic it is possible that many (or even all) of the events do not happen the way we see, or perhaps only happen in the character's mind. O'Barr was deliberately ambiguous about it all. The better-known mythology about a crow being the spirit guide who takes souls into the afterlife but brings them back to "put the wrong things right" when necessary, and the crow being an actual bird that if injured or killed will drain Eric's mojo, was an Adaptation Expansion created for the film.

In the comic there is absolutely no exposition regarding exactly how Eric has returned from the grave - if that's even what actually happened. The mythology of the film franchise is so much better known than the ambiguity of the comic that there are plenty of people - plenty of fans, even - who just assume that "Eric is brought back from the dead by a mystical crow" is part of the original comic, when basically everything that happens in the comic is up for individual interpretation and never explicitly stated. (It should be noted that in interviews given in Comics Scene during the early 90s, as the first iteration of the comic was wrapping up, the author himself seemed to lean towards a supernatural explanation, though not quite in the way the film gives it.note Eric came back, O'Barr stated, because his love was so great that he could perform such sins in the name of vengeance without becoming guilty.)

The Crow caught lightning in a bottle — the author committed his Creator Breakdown to print as it happened — and as a result, it proved impossible to replicate. Fan response to the various subsequent works in the Crow franchise has varied greatly, from enthusiasm to hostility. As with any franchise that evokes a strong emotive response in the fans, especially one where a tragic death early on is involved, the mileage always varies.

Plans to reboot/remake The Crow as a film have bounced around Hollywood in recent years, however, none of these plans have come to fruition. Most recent news as of writing: Both the director and lead actor leaving in mid 2018.

Please list tropes on the pages for various works.

The Crow comic books include:

The page for the original comic and subsequent comic books can be viewed here.

The films in the Crow franchise to date are:

Novels in The Crow franchise to date are:

Television series in this franchise are:

A 1998 Canadian television series based on the concept — The Crow: Stairway to Heaven — lasted one season (22 episodes); while it garnered decent ratings, the show ended when Universal bought its production company, Polygram Filmed Entertainment. Universal eventually released the full series on DVD, Hulu, and Netflix.

The page for the television series can be viewed here.

This franchise in general contains examples of the following tropes: