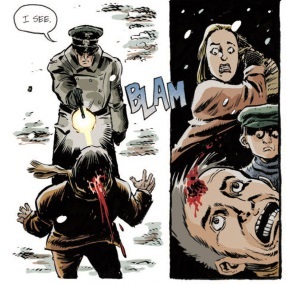 just for not knowing how to play chess.
"I need nothing from you but your barely-beating heart to lure that snivelling (sic) wretch right where I want him. When you die, you will die knowing that I have tortured your little friend with horrors beyond horrors. If you could only see the morbid vividness of mutilation and degradation that this half-human parasite will soon endure...only then would you truly understand how easy you have it."
—Damien Finch to Fats, The Crow: 2037
Advertisement:

Real love may be forever, but unfortunately so is evil. The Crow and its various subjects have fought countless villains throughout the decades, such as gangsters, rapists, and thieves. But even among them, there are those who qualify as being utterly reprehensible.