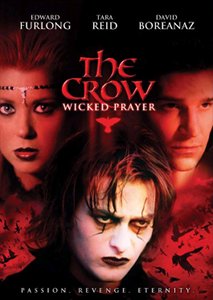 "Someone owes me two lifetimes and a set of perfect blue eyes."
Advertisement:

The fourth film in the Crow franchise, loosely based on Norman Partridge's tie-in novel of the same name.

Jimmy Cuervo (Edward Furlong) is a down on his luck ex-convict in love with Lily Ignites the Dawn (Emmanuelle Chriqui), the beautiful daughter of the head priest of the neighboring Raven Aztec tribe. Unfortunately, their romance is cut short when Luc Crash (David Boreanaz), a former prison buddy of Jimmy's, murders them under the instruction of his shaman girlfriend Lola Byrne (Tara Reid, no shit) for a ritual that will turn Luc into Satan. Jimmy is resurrected by the title bird to exact his Roaring Rampage of Revenge and stop Luc before he can bring about the end of the world.

Bizarrely, this movie was directed by Lance Mungia, whose only other directing credit is the cult classic Six String Samurai.