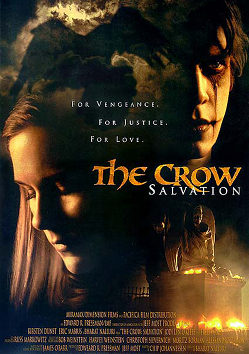 The Crow: Salvation, the third movie in the Crow film series, adapts one of the spinoff novels (The Lazarus Heart).

Prisoner Alex Corvis (Eric Mabius) dies via electric chair on his twenty-first birthday, executed for the rape and murder of his girlfriend Lauren — even though he declares himself innocent of the crime up to his last words. The titular crow brings Corvis back from the dead so he can set things right, but Alex has only one clue as to who killed Lauren: the memory of a man with distinctive scars along his arm putting a key piece of evidence into Corvis' car. As Alex tries to work out who did the deed, he finds out that Lauren died because she discovered a secret about a group of Dirty Cops — one they didn't want anyone bringing to light.