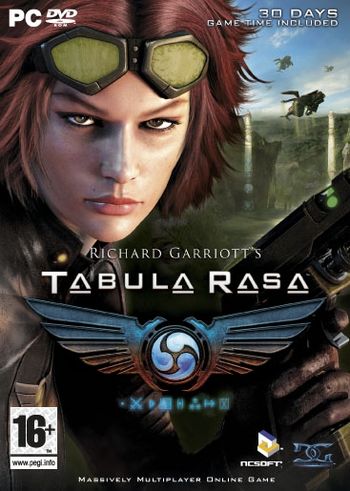 A now-defunct 2007 MMORPG developed by Richard Garriott (of Ultima fame) and Destination Games, and published by NCSoft, Tabula Rasa attempted to evoke a sci-fi feel and weaponry in a blend of FPS and RPG.
Advertisement:

A short time in the future, Earth is attacked by a hostile alien alliance known as the Bane, for apparently no reason. The best, brightest, and strongest are evacuated by wormholes, while the Bane take over, pollute, and strip-mine Earth. The player is a Receptive, able to learn, invoke, and wield logos, for the Allied Free Sentients—a loose coalition of species discovered and led by humanity through the series of wormholes discovered by the fleeing humans. Of course, the Bane outnumber the AFS a hundred to one, and the Receptives might just be all that stand between the AFS and annihilation.

Tabula Rasa had a short run for an MMORPG, closing down just fifteen months after its release on March 1, 2009 . In its wake, everyone from gaming websites

weighed in on why it failed, usually blaming it on confused game mechanics, poor sales, low subscription numbers, and a long development cycle. In the end, it turned out that it was really NCSoft killing the relatively healthy MMO to prevent Garriott from earning a windfall in stocks, going as far as to fake his resignation letter (while he was on a space flight, no less) in order to let him take the inevitable heat.